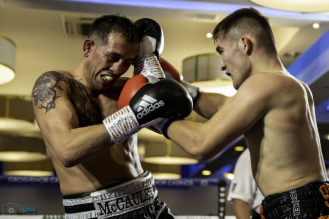 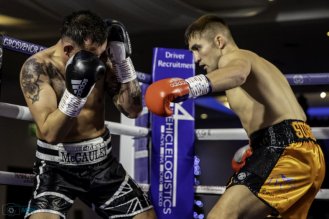 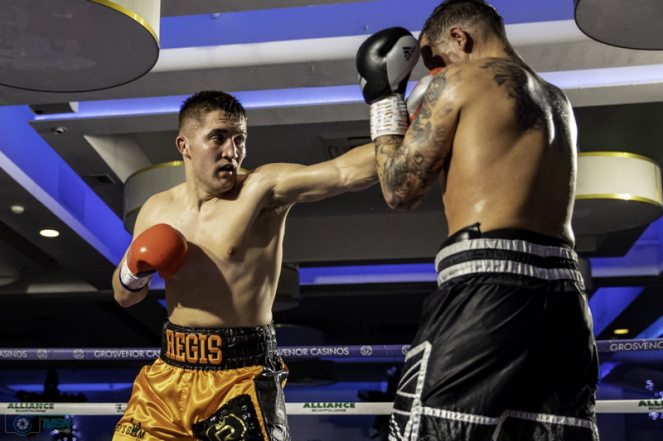 When Nottinghamshire’s Regis ‘The First’ Sugden stepped up at short notice to replace big brother Chad on the card of SEASON’S BEATINGS on Saturday 21 December, the 100-plus supporters who made the journey down to Birmingham to cheer him on were rewarded with a fifth consecutive victory from the Suggy’s Gym boxer.

The 24-year old professional from Newark retained his unbeaten record when he defeated Kevin McCauley by  unanimous decision in their four round Welterweight bout on the BCB Promotions show at the city’s Holiday Inn.

Going up against a tough and capable opponent who normally pushes the prospects all the way, from the start of the contest Regis set out to show that things were going to be different for Kevin this time.

Despite Kevin’s attempts to counter and catch him, Regis proved too smart for him, working the body and head aggressively from the opening bell and returning straight away with his own heavy punches.

Although he went into his shell at times, Kevin was always trying to set traps for the Newarker. But after Regis was declared the 40-36 winner, Kevin admitted he was impressed by his opponent’s boxing skills and that he was hurt to the body several times and concerned about getting knocked out.

“I’m always excited to have a fight, especially one with just a week’s notice, and being on the card for the leading promotion in the Midlands for this one was the icing on the cake,” said Regis.

“Tonight was a fantastic way to end what’s been a great year for me with five straight wins since I made the switch from MMA to boxing back in March.

“But I couldn’t do what I do without the help and support of so many people, from my coaches and corner men to all of my training partners and sparring partners. A big thank you to them and to the fans and followers who’ve been behind me all the way, not just tonight but at every one of those five pro fights this year.”

Suggy’s Gym head coach and proud father Dean Sugden added: “Everyone was buzzing after Chad’s fight on the Matchroom Boxing/Sky Sports show in London on Thursday.

“But Regis has made his mark too over the past nine months and tonight he reminded everyone that there are two hot prospects in British boxing right now, both of whom have been training and fighting out of Suggy’s Gym since they were five years old.

“There’s no doubt in anyone’s mind that Chad and Regis have bright futures ahead of them in the world of boxing. Add their youngest brother, GLORY Kickboxing’s British Bulldog Bailey, to the mix and together they show all the youngsters who train here at Suggy’s Gym in Newark that if they follow their example and stay as focused and disciplined as the three of them do, they can also make a career for themselves in combat sports.”