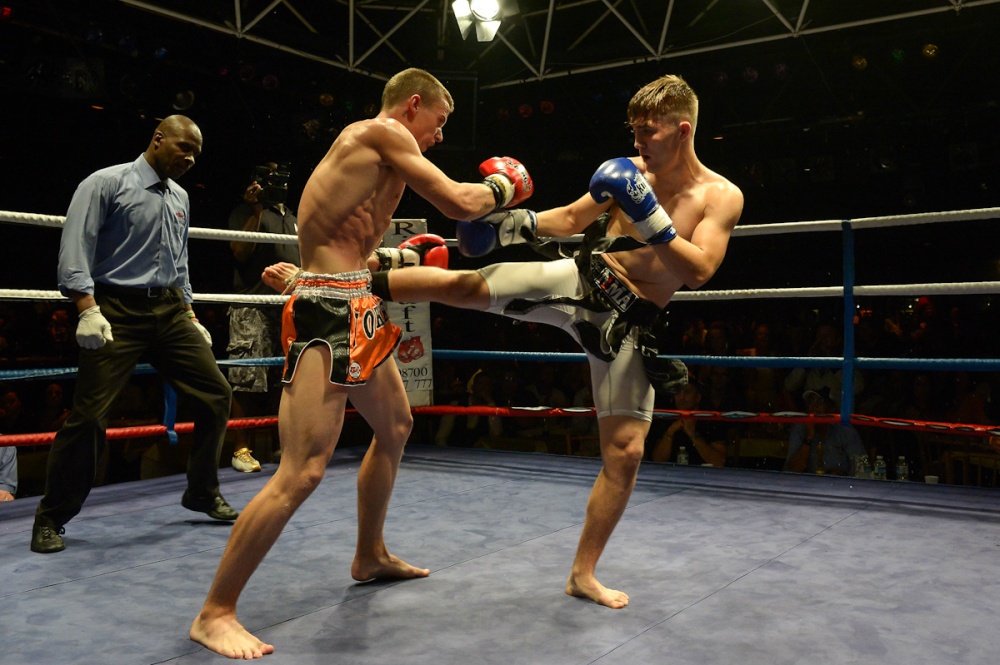 A convincing win in his professional K-1 debut at the Circus Tavern in Purfleet, Essex on Saturday 27 July was the icing on the cake for Suggy’s Gym fighter Regis ‘The First’ Sugden.

Taking place on his 18th birthday, the fight was a real test for Regis, who took on the previously undefeated Muay Thai champion Brett Webster at the famous FightMax 8 promotion.

Earlier in the evening, his 15 year-old brother Bailey ‘BadBoy’ Sugden beat one of Regis’s former opponents, Lewis Jamshad from Wutan Muay Thai. Racing out of the corner at the start of the fight, Bailey was relentless in his attacks, unleashing heavy kicks, punches and knees which left his older opponent reeling. Despite the constant pressure from Bailey, Lewis kept coming back but was lucky to see the final bell and a unanimous decision was announced in favour of the young Newark fighter.

When his turn came to fight, a patient and strong Regis combined speed of movement, boxing skills and kicks to take control from the outset. Instructed to ‘take it to him’ in the second round, to the delight of his 50-strong followers and the rest of the crowd Regis did just that, rocking Brett with some massive punches and a jumping kick that sent his opponent reeling to the canvas.

Regaining his composure after a much-needed count from the referee, Brett was faced with even more intelligent pressure from Regis, who landed punch after punch and kick after kick. Then a perfectly timed jump spinning hook to the head left Brett stumbling around the ropes, resulting in a second count from the ref.

At the end of round two, Brett returned to the corner with an enormous dent in the side of his head. After a doctor’s examination, he was allowed to continue and showed tremendous courage in the third but met with yet more domination from Regis, who took the fight by a unanimous decision.

“It was good to get my boxing gloves back on and fight under K-1 rules,” said Regis. “It’s probably not the usual way to celebrate your 18th birthday but for me it was a great reason to get family and friends together and the best present I could have!

“I’ve now been offered a place in a four-man tournament in Sheffield on 7 September, where I won’t be fancied. And although I’m still focussed on MMA and my preference is to fight on the Ultimate Fighting Championship, fighting under K-1 rules in the meantime will keep me busy and sharp.

“It’s great that my older brother Chad has just signed with K-1 and will be performing on the biggest arenas in the world. But I’m looking forward to showing K-1 there’s another Sugden brother fighting out of Suggy’s Gym. If I keep winning, maybe I’ll have the opportunity to follow in Chad’s footsteps.”

Coach and dad Dean Sugden was delighted with the performances of his two sons. “The accolades were coming in thick and fast on the night,” he said. “Fans and coaches alike were full of praise for both Regis and Bailey, while the promoter and Main Event fighter Reece Rowell described Regis as ‘world class’. Based on his performance on Saturday night, that’s a verdict I have absolutely no argument with.”